My great-granddad Charles Holst was one of 3 great-grandparents who were alive when I was born, and one of 2 I can actually remember, although the memory is fuzzy.  Grandpa Charlie (so-called by my aunt and uncles to differentiate him from the other grandparents) was born in Healdsburg, Sonoma County, California, on 18 October 1884, to Peter Holst, who was 37, and Caroline (Thomsen) Holst, who was 41.

Charlie had an older sister, Annie, born in 1875, an older sister Mary born in 1881.  Another son, named Peter, was stillborn a year before Charlie was born.  Reportedly, there was another brother, George, who was born in 1885, but I have found no records backing up his existence.

The Holsts did not live in town, but instead on a ranch on Dry Creek Road, about 4 miles from Healdsburg proper, back in the hills.   Charlie’s father had a vineyard and a winery; the winery remained in production until Prohibition.

Grandpa Charlie’s parents were ethnically Danish, having both been born in the Duchy of Slesvig near Flensburg – an area which is now in Germany, and, in fact, became part of Bismarck’s Prussian Empire before they immigrated to the United States.

There is little I know about my great-grandfather.  I don’t know if he spoke Danish in addition to English.  I don’t know where he went to school, if he went to school at all – presumably there was a local school in the Healdsburg area.  I don’t know how he met the woman he would marry, Hazel Hannah Englehart, but possibly it was through her father, who reportedly built (or painted?) the Holst farm house, as he was a painter and carpenter.

In any case, I had always been told that Charlie and Hazel married in January 1908, in Marin County, just south of Petaluma.  But when I ordered a copy of their marriage record, I discovered they married on 28 January 1909.  Their firstborn, a son named Charles (Junior) and called “Sonny”, was born just 6 months later on 2 August 1909. 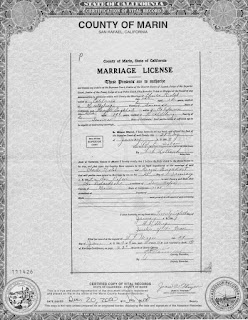 
With Prohibition arriving in 1920, Charlie and his father ripped out all the vineyards they were cultivating, and starting growing plum trees.  Charlie’s father, a viticulturist, died before the repeal of Prohibition, as did his mother.  Charlie remained on the land, and made a living off the land until he died in 1968.

His children grew up and moved away, one serving in World War II and another having a family in Sonoma County, then divorcing his wife, and later moving to Oregon with his second wife.

Their land off Dry Creek Road was where we visited when I was a four year old.  I remember the pink house they lived in, the sunshine, the hills which seemed to hug the house they were so close.  I remember going outside, and seeing my great-grandpa in the vegetable garden they had alongside the house, wearing denim overalls.   Although my mom tells me both my great-grandparents saw me as a baby, before we moved to Florida, that is my only memory of my great-granddad.  He died 2 years later in April 1968, and is buried in Oak Mound Cemetery in Healdsburg.

Posted by cathyd at 6:18 PM No comments:

My granddad was the youngest of 3 sons, born to Giuseppe Diamantini and Maria (Bolognesi) Diamantini in Sonoma County, California, on 16 October 1914.   My mother -- his daughter – always said he was born in Calistoga, which is in Napa County, or in Mark West Springs, which is in Sonoma County.   The California Birth Index lists the county as Sonoma; I recently ordered the certificate, so I guess we’ll see.

The U.S., Social Security Applications and Claims Index, 1936 – 2007, database online at Ancestry.com lists Grandpa’s birth place as Santa Rosa South, and his name as James Diamantine.  He made his application in 1942, and at this time, he and his brothers were Anglicizing their name from Diamantini to Diamantine.

I knew my grandfather’s name to be James Eugene, but I do not know the name he was born with.   According to the California Birth Index, a first name for my grandfather is not listed on the birth certificate.  However, on the 1920 census, his name is given as Trenton (which doesn’t sound very Italian to me, nor is it a family name that I know of.)

My granddad’s two older brothers were Gaspare Antonio (aka “Gilbert”), born in 1904, in Italy, and Francis Angelo (known as Frank), born in January 1909, in Healdsburg, Sonoma, California.   Although the State of California required registering births as of July 1, 1905, there is no certificate for Frank.  My great-grandparents,  just recently in the U.S. – they arrived in 1908 – likely did not know “the routine”.     However, I do have a copy of Frank’s Social Security Application, on which he states his date and place of birth.
I have not been able to find the family on the 1930 census (yet), but presumably they were living near Healdsburg, as my grandfather attended Healdsburg High as a member of the Class of 1934. 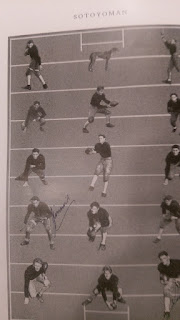 While in high school, my granddad played football, and also met my grandmother, Elizabeth. 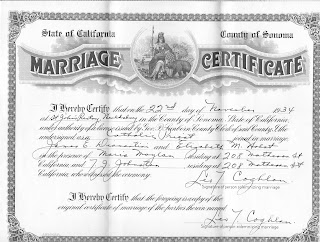 James and Elizabeth married on 22 November 1934, in Healdsburg, and then went to live in Tracy, California, where they worked at the service stationowned by James’ older brother Gil.  My mother was born within two years of their marriage, and life was good, until Elizabeth died in 1940, after giving birth to a stillborn daughter.

After my grandmother’s death, my grandfather came back to the Hayward area, where his parents were living.  They fixed him up with an Italian woman his age who lived down the street from them, and the two were married in May 1941.  James and Jean (“Nonna”) had 6 children in the next 10 years.

Grandpa worked in the shipping yards during World War II, and later worked with his brothers, who owned a lumberyard.   He was also a beekeeper, and, in the early 1970s, he and Nonna moved out to Manteca, California, where they had a ranch, and where he cultivated a vineyard.

But Grandpa began to suffer from Parkinson’s during the late 1970s, and so he and Jean decided to sell the Manteca property, and move back to Hayward.  I only saw my granddad a few times when I was growing up, and didn’t go out to California to see my mom’s relatives at all for a period from about the age of 10 to the age of 25.

Grandpa’s Parkinson’s got worse over the years, to where he could barely walk and talk.   He died in May 1995, at the age of 80, in Hayward, and is buried at Holy Sepulchre Cemetery in Hayward, near his parents and his brothers.

This is what I know about my maternal grandmother: nearly nothing.

Elizabeth died young – 2 months past her 26th birthday –likely from deep vein thrombosis, as she she had been in the hospital lying in bed for 8 days after delivering a stillborn baby girl in Tracy, California, in August 1940.

My mother was only 4 at the time, and her only real memory of her mother was the day she came home from the hospital.   Her memories, as she’s told them to me, are like snapshots: My grandmother was helping my mother wash up for bed when she slumped over; the next thing my mother remembers is her own grandmother, Hazel, yelling to her, “Go get your father!”  And, finally, she remembers her father bringing her into the bedroom, where Elizabeth’s body was laid out on the bed, and was told to kiss her mother good-bye.  She didn’t want to – her mother was so still, with her skin growing cool.  It was scary.

And in the years afterward, no one talked about it.  No one.  Not her dad.  Not her grandmother Hazel, who buried her only daughter.  Not her granddad Charlie.  Not her uncle Bill, or uncle Sonny, who survived their sister.  That’s life, we can’t change the past, let’s move on.  You didn’t know her, how can you mourn?

The mystery of my grandmother’s existence – what was she like?  Who were her people?  -- was what drove me to genealogy.

Elizabeth May Holst was the middle child and only daughter of Charles and Hazel (Englehart) Holst, born on 25 June 1914, in Healdsburg, Sonoma, California.   Her brother Charles Junior (aka “Sonny”) was 5 years older, and her brother William (“Bill”) was 9 years younger.    There was a fourth child – a girl – stillborn in 1928.

Elizabeth’s parents referred to her as “Honey”; in her later years, her brother-in-laws would call her “Betty”.   (“Betty” is how I think of her, too, since I knew my grandfather’s brothers, and never knew her as a grandmother.) 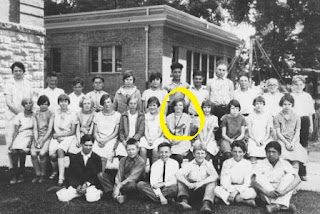 The girl circled in yellow is my grandmother, in the 6th grade.

Betty attended Healdsburg High, graduating in 1932.  I know she took Home Economics, as my mom has a bound set of handwritten notes and recipes Betty wrote down from class. 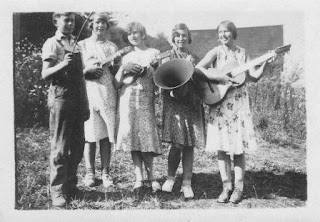 She may have taken music classes; in the above photo, taken in November 1930, she is playing the mandolin (third from right). 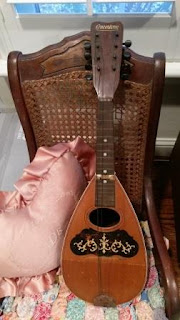 This is Betty's mandolin, currently in my mom's possession, on a rocking chair which belonged to Betty, and resting on a quilt Betty made.

She may have acted in school plays; she did so in grammar school. 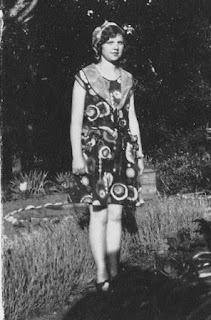 Here is Elizabeth at 17, her senior picture: 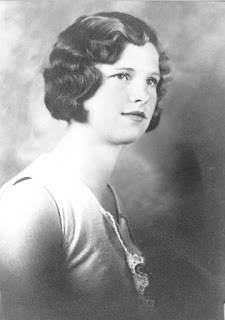 And this is her high school graduation day.  She is at the ranch off Dry Creek Road, near Healdsburg. 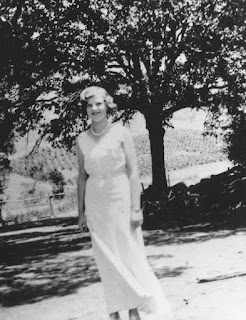 It was in high school that Betty met James Diamantini, a first-generation American, whose parents were Italian Catholic immigrants from the Marche province of Italy. 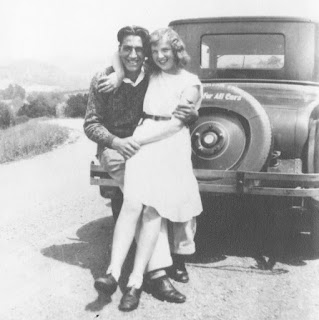 They got married on 22 November 1934 in Healdsburg.  Elizabeth converted to Roman Catholicism prior to their marriage, and took the confirmation name of Catherine.  The strong Protestant heritage of my grandmother was something new I learned in my research and may explain why my great-grandmother did not attend her daughter's wedding. 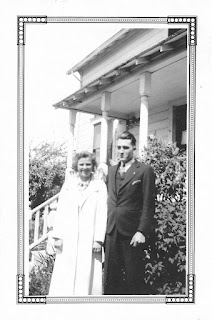 My grandparents on their wedding day.  I believe this is in front of the family's ranch house.

My grandparents moved down to Tracy, California, where they ran a gas station. 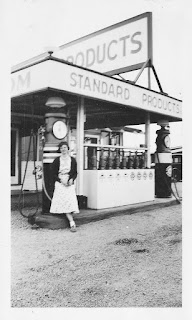 It was in Tracy where my mother was born about 16 months after my grandparents were married. 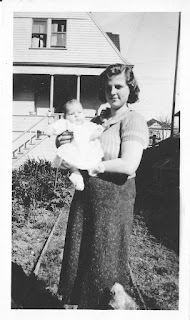 This is my mom with her mother.

My grandmother got pregnant a second time in 1940; unfortunately, the baby girl was stillborn in August 1940 in Tracy.  Sadly, my grandmother passed away a week after the stillbirth, the day she came home from the hospital.  She was only 26 years old; my mother was just 4. 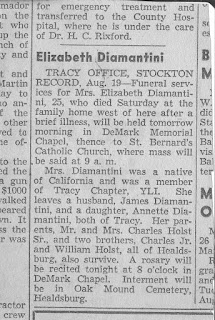 Elizabeth is buried in Oak Mound Cemetery, in Healdsburg.

cathyd
I've been researching my family tree since the early 1990's, and have broken through a "brick wall" by means of DNA testing.